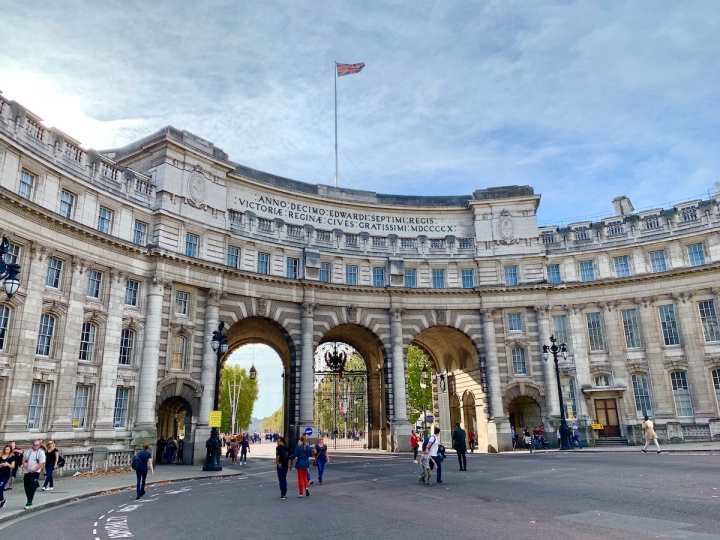 I visited London last week from 11th to 14th October to visit my friend Jade and watch Michael McIntyre’s Big World Tour show at the O2. I travelled to London Paddington on Thursday morning by train and got there early afternoon. We stayed in a hotel near Lancaster Gate and Kensington Gardens / Hyde Park and had a lovely stay.

I arrived into London and headed to the hotel to check in before catching the underground from Lancaster Gate to Oxford Circus to go to the Apple Store. I knew I was there from Thursday onwards to scheduled a genius bar appointment for mid-afternoon. After that I headed back to the hotel to meet Jade and get ready to go for dinner and the O2. We caught the underground from Lancaster Gate to Waterloo where we got out to have dinner at GBK there. This was part-way to North Greenwich on the tube and we decided it would be best to avoid the massive crowds of people going to the show.

We got to the O2 fairly early (must have been between 6:30pm and 7pm) and the doors were already open at this point so we headed in through security and leisurely made our way to our seats. It was a great show and we had booked tickets for this back in January I think when I was in London for New Years. After the show we just headed back to the hotel as I wasn’t feeling 100% and wanted to rest up so I could make the most of the rest of my time in London.

This is an image of Kensington Gardens (only a two minute walk from our hotel). We went there Friday morning and then headed through Hyde Park instead of taking the underground.

A quick selfie in front of the fountains of Kensington Gardens. It was quite a windy day but it was dry (a lot better than what the weather was back home in South-West Wales)!

We then headed to the Deliciously Ella deli (not far from Oxford Street) and I wanted to visit as I have recently purchased the plant-based cookbook and everything they have there is vegan. We had a quick snack (I had a peanut butter slice) and I chose to have a blended juice drink as I wanted to boost my vitamin and veggie intake after feeling a bit ill last week.

We stumbled upon the ‘Thanks A Bunch’ Cadburys pop-up shop on our travels (we were literally wandering aimlessly). I couldn’t eat the chocolate but I got a ‘Rose’ for my mum and picked up another chocolate as well to take home with me.

The weather was beautiful all weekend and the temperatures reached 24 Celsius! I certainly chose the best time to visit London as the weather at home was very miserable and wet. They even had bad flooding as well in Wales and it had cleared up by the time I got home on Sunday. At that point the storm had travelled East towards London and I had just left. A lucky escape on both counts of me travelling East to London and then back home West!

The parks in London were lovely in this weather and we decided to have a sit under one of the trees there (I actually sat in the shade as I was quite warm!) This image (above) is one from St James’ Park overlooking the lake towards the London Eye and the photo below was looking back towards Buckingham Palace.

We visited the Westfield shopping centre on Friday before going to visit Jade’s nan and take dinner back there. It was lovely to see her again and have a relaxed evening. We headed back into London around sunset and headed back to the hotel where we watched Gogglebox and some other Friday night tele!

On Saturday we walked fourteen miles around London. It’s crazy to think how far we walked taking into account we did a lot of travel on the London Underground as well. We had an evening meal booked for Zizzi in Covent Garden so after we had been shopping and wandering around London we headed back to the hotel for a quick afternoon nap (it was fabulous) and to get ready for the evening.

This is the Covent Garden Apple Store all boarded up when they are completing renovation works. I wanted to go and have a look in case there was anything we could see but of course Apple had cleverly used the archways to block-off and keep everything secretive. I like the designs they had on the boards though, it was lovely and bright! There were a lot of people taking photos as well. I am looking forward to seeing what Apple do with this store as it used to be my favourite one in the UK before they renovated the Regent Street location. I’m hoping it’ll become my favourite once again!

I have to mention the food I ate in London. I am actually surprised at how much I managed to eat… We went to Pret A Manger for breakfast which was lovely, it was great visiting the Deliciously Ella deli as well as sampling more vegan dishes at Wagamama’s Noodle Lab and Zizzi. I couldn’t recommend Wagamama highly enough and I am even more impressed with their vegan menu than I am their regular/main one! We just happened to stumble across Noodle Lab too which is where they test out and trial all of their new creations before launching successful ones nation-wide. The dessert I had at Zizzi (pictured above) was the best I have eaten since beginning my plant-based diet in May. It came with dairy-free coconut ice cream which was amazing too.

It was a great trip to London and I really enjoyed visiting again. What is one of your favourite places to visit? Thank you for reading and have a great day!

This site uses Akismet to reduce spam. Learn how your comment data is processed.